When I was in high school, a group of Tibetan Buddhist monks visited our campus for a week, bringing with them bags of colored sand and an assortment of brass tools. School administrators marked off an area of the great room with ropes, and provided a large flat board to the monks. Over the next several days, the team of monks created a very large sand mandala using just a few simple tools. The mandala was complex, it was beautiful, and even three-dimensional, tiny spiral stacks of sand grains poking out of the floor, ready to collapse at a breath.

The idea of the mandala was focus and craft – the creation of something beautiful and complex by applying techniques learned over a lifetime. The concentration of the monks was ultimate. Each movement was deliberate and meditated, no pun indented.

The classic Buddhist image of this hack is that thoughts are like clouds passing through a spacious blue sky. All your life, you’ve been convinced that this succession of clouds comprises a stable, enduring identity — a “self.” But Buddhists believe this self this is an illusion that causes unnecessary suffering as you inevitably face change, loss, disease, old age, and death. One aim of practice is to reveal the gaps or discontinuities — the glimpses of blue sky — between the thoughts, so you’re not so taken in by the illusion, but instead learn to identify with the panoramic awareness in which the clouds arise and disappear. — Neurotribes‘ Steve Silberman

Although the appearance of the orange-clad, bald men was interesting, it was the ceremony at the end of the ordeal that fascinated me and changed the way I appraised material possessions: they dumped the entire thing in a lake. The ceremony had little pomp, a ten-minute event in which the monks walked the result of their weeks’ work down to the water, collected some of the sand in plastic baggies to give to onlookers to distribute elsewhere, and dumped the rest in the lake. All of us stood on the sideline, taking pictures.

I find the picture-taking quite humorous now. The entire point of the ceremony is to demonstrate the fleeting nature of life – the mandala, complex and beautiful, is limited in time no matter what we do. A human, no matter how important, only has a finite amount of time, and will eventually become like the mandala, broken into component parts and recycled.

We were not supposed to take the sand as souvenirs, a practice which attempts to make the moment permanent. Some people did, including myself. The purpose was to spread the sand at a favorite place, and have our own moment of zen. And yet many of us did not get that message. I still have the sand somewhere in my room at home, cluttering the space. The same with pictures. We – the modern Americans – felt that the moment would be lost if we didn’t record it, take something from it. The Buddhist monks were happy to live in the moment, and required nothing from it except practice, experience, and time to meditate.

I reflected on this last year when the Lawrence Gaming Club was trying to decide whether or not to start a new world in Minecraft. Club members had spent hours and hours building extensive houses, mining chests full of resources, interconnecting the continents with a massive rail system. And yet the server was unstable and liable to crash, and people were becoming bored without things to do. Even I was attached to the work I had done, but then I remembered the monks and their mandala. How was it different from the work we had put into the Minecraft world. Both were transient. We wiped the digital world clean and started fresh, which ended up being the right decision. 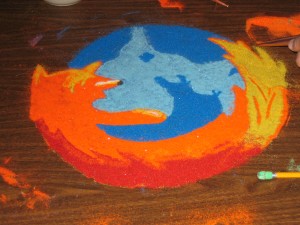 A sand mandala of our own, by myself, SIB, and Picone. The monks gave us the sand for this. Also: Firefox 😀

Also: Apparently there is a comic about Steve Jobs and zen, a preview of which is available online.