[Editor’s Note: These are a series of posts about my experience in the Summer ’13 batch at Hacker School in NY.]

I am sitting right now in the basement of the Lexington Inn in Brooklyn, which is a nice enough place. I’m only staying here for six days, when I fly back to Lawrence for graduation. After that, I’ll be living in an apartment much closer to Manhattan, although still in Brooklyn. They gave me a basement room on the side of the hotel where the subways are, so I can hear the squeal of the brakes every fifteen minutes or so. I guess this counts as adventure?

My trip today went uneventfully – ATW->DET, DET->EWR, which is Newark, NJ, and has a three-letter code that grosses me out, probably because it sounds like “Sewer” in my head. I took some photos out the window in Detroit and New Jersey, which are pretty much indistinguishable from each other. 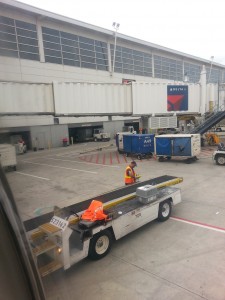 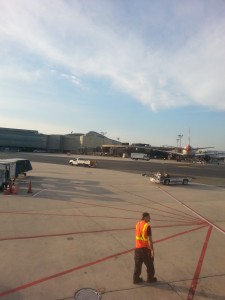 Not the most exciting. I should have grabbed some skyline shots from the airport tram, but I didn’t.

My plans for tomorrow are to head into the City to try to find the place where Hacker School will be, and then meet up with my friend Levi to check out the apartment I’ll probably be living in for the next two months.